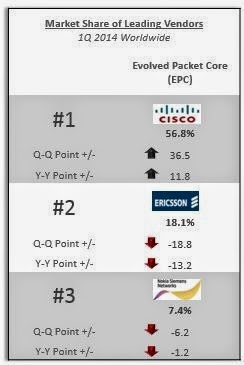 Cisco posted significant gains in Packet Core (MPC + EPC), increasing 306.3 percent q-q and 32.4 percent y-y. Cisco, which holds 43.2 percent of the total mobility market, has been focusing on its Packet Core offerings with a high price/performance portfolio strategy and winning in key LTE markets. Cisco’s core strengths in Packet Core and its extensive LTE core network experience are a result of its large/incumbent position in AT&T and Verizon Wireless where it has acquired complex deployment experience in 3G migration, LTE capacity planning, subscriber policy management, and multimedia/video revenue creation models.

Ericsson, which holds second place in the total mobility market, continues to lose market share in all segments, decreasing 28.3 percent q-q and down 30.2 percent y-y. The company reported 147 EPC contracts in 70 countries and 104 commercial live EPC networks in 1Q.

2014 will see increases in mobile spending, globally, despite ARPU declining across many regions. EPC will continue to be a highly dynamic market for the next several years as vendors and carriers work through network virtualization. Mobile service providers are focused on optimization of RAN and Mobile Backhaul, as well as on their network capex and opex. Companies are delivering new innovations in Mobile Backhaul that are enabling mobile service providers to scale investments by reducing hardware costs by considerable amounts. Flexibility in Mobile Backhaul is a key requirement to winning the race for optimization. Many Tier 1 vendors have released or announced partnerships to provide a range of deployment options to mobile service providers, enabling planning and operations efficiencies. ACG expects innovations, investments and consolidations within the Mobile Backhaul segment in 2014.