Sea of Change Ahead for the Optical Market

The financial and analyst community tend to roll up equipment vendors’ revenues for product lines into a single high-order number to gauge market size and simplify the reporting and analysis. GAAP reinforces this mindset as the majority of public companies that are equipment and/or software suppliers generally report only two types of revenue, product and service. Any further breakdown of financial disclosure is not mandated though some vendors provide it in the interest of providing more transparency to their shareholders. Yes, analyzing top-line revenue is a way to judge overall market size and gain a sense of direction, but if you look only at the market performance at the highest level you could easily get a false impression of the market and its opportunities.

The optical market is a good example of a calm surface that doesn’t immediately reveal the strong currents underneath. If we review the historical performance of the optical networking equipment market revenue (Fig 1), we see a spike in 2007 to 2008, which was driven by build-outs by wireless and wireline service providers. The wireless service providers were building 3G and 4G networks using optical as the preferred backhaul. The wireline service providers were building out business Ethernet services using optical metro rings and long-haul optical technology to interconnect the metros. Optical technology was also being deployed to interconnect data centers and to drive revenue growth. 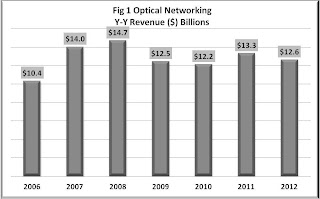 Since the optical infrastructure build-outs that peaked in 2008, the overall market has remained relatively flat with some slight variation but averaging around $12.65 billion per year for the last four years. Based upon this top-line revenue growth, or lack thereof, you might quickly conclude this market is flat with little growth or upside revenue potential.

However, by segmenting the optical networking market revenue along product/technology lines we see a vastly different view of the same market (Fig 2). The revenue spikes for the technology commonly used (MSPP, Metro WDM and Long-Haul DWDM) in wireless and wireline applications. Although MSPP seems to be in decline, the Metro WDM and Long Haul segments are showing growth. SONET/SDH and OXC are declining, both dropping well below the $100 million per quarter run rate. The POTS technology segment launched in 2008 has quickly grown to be a significant contributor to the optical market. The growth in POTS is somewhat cannibalizing the MSPP segment and has become a big contributor to the overall market. 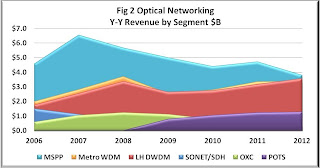 The true takeaway from all this is that the optical market is very dynamic with robust growth in specific segments and major declines in others. Similar to the router market, the optical market has benefitted from the de facto standardization of Ethernet and IP as the primary subscriber access technology for wire line networks. This combined with the users’ insatiable demands to support bandwidth-hungry video applications will continue to drive this market.

Competitors cannot be complacent and expect to grow at market rate by doing nothing more than what they have been. Because there is little Greenfield in this space, competition is fierce and vendors will be aggressive to win against or unseat an incumbent optical supplier. There is also a melding of the optical technology into the routers and vice versa that will tend to further confuse the market (as does the need for SDN in all network elements). Product technology cycles tend to run on a seven-year cycle, placing the next wave of network build-outs and expansion in the 2014 time frame. The industry will see optical convergence, SDN and terabit level trunking driving changes within this industry over the next several years.